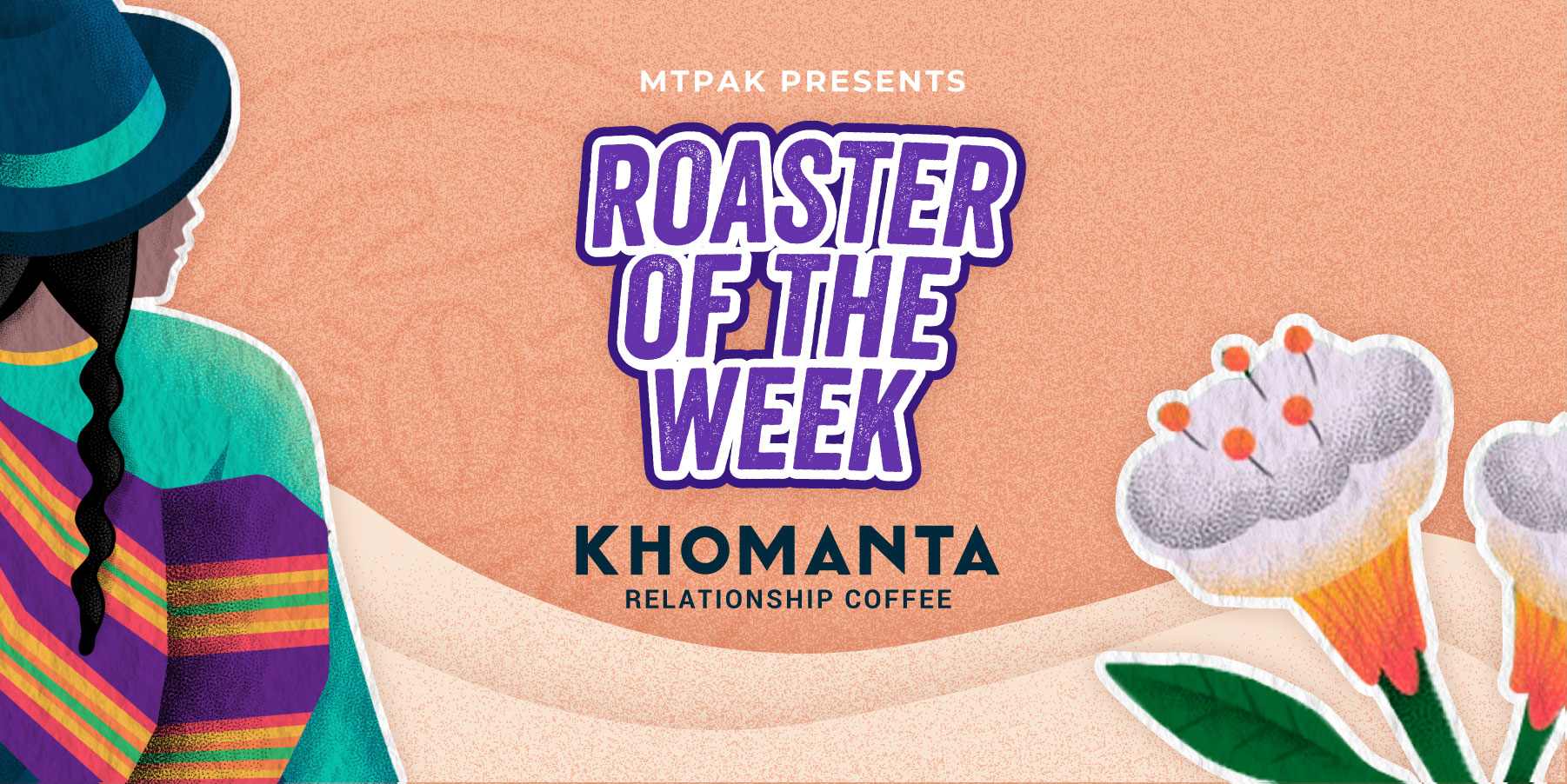 Roaster of the Week is a series that focuses on specialty roasters and their unique stories. This week, we talk to Khomanta, a small-batch roastery from Kansas City that’s on a mission to genuinely improve the lives of producers in Peru.

When Clint and Haydee were living in Peru, they wanted to do something different. Haydee was looking to strengthen connections with her home country, while Clint (a self-professed serial hobbyist) was happy to support her.

In the end, they narrowed it down to two options: quinoa or coffee.

“It could easily have been quinoa,” Clint tells me. “But it just so happened that Haydee had done a cupping course with in Lima with Tika (a coffee lab and roastery), and she loved it. She then asked if I wanted to join a roasting course and, of course, I said yes.”

With the encouragement of Tika, Clint and Haydee decided to go into coffee – under one condition: “Tika comes from a producing family and was able to provide insight about the plight of the producers and how it all works,” Clint says.

“After speaking to them and doing our own research, we soon realised there was a lot more to coffee than turning it brown and drinking it. So we said, ‘Let’s do a coffee company, but let’s figure out how we can help the producers out as much as possible while doing it.’”

After returning to the US in 2019, the couple launched Khomanta, a small-batch specialty roasters in Kansas City. The name Khomanta comes from the Aymaran word for “embrace” which, for Clint and Haydee, perfectly encapsulated their aims: to protect the producers they work with and reinforce Haydee’s Peruvian roots.

Wanting to build as much of the brand as they could from Peru, they set about looking for someone who could design their packaging and landed on Lima-based graphic designer Alejandro Gavancho. They then approached him with a brief.

“We knew the coffee industry was extremely saturated and that it would be tough to start a brand using just a brown bag with a stamp on it,” Clint explains.

“So we said, ‘Let’s just try and come into this sprinting’. We spoke to Alejandro and told him we wanted something beautiful; something that would catch the eye and that people would be proud to have on their counter.”

The result is a striking pink bag featuring emblems of Peruvian culture, from the hummingbird to the traditional manta worn by Andean women. Not only does it capture the essence of the brand, its soft pastel tones offer a calming influence while drawing in the viewer.

The importance of relationship coffee

Scanning the menu of most specialty coffee roasters will throw up a whole host of different origins, from Hawaii to Rwanda to Guatemala. In fact, according to recent statistics, the average US roaster offers 12 different types of coffee.

Khomanta, on the other hand, offers coffee only from Peru, a decision Clint and Haydee were dead set on from the start.

“People often ask, ‘Why wouldn’t you offer an Ethiopian, a Kenyan, a Guatemalan? Why would you restrict yourself to a single country?’ The reason we’ve stuck with Peru is that relationships are the focus of our company,” Clint explains.

“We’re hoping, at some point, to boost the producers out of their current situation. We figured that this would be easiest to do in the country we had the best connection with. We speak Spanish, we know the culture, and we’re able to talk about things they understand. It wouldn’t be the same at all if we were to do this in Kenya or Ethiopia.”

Khomanta has already seen the benefits of these relationships. Clint tells me about a few instances in which producers have called to say they’ll put aside their best coffees for them, despite being among their smallest volume buyers.

It also means that if a bigger roaster comes along, the producers will ensure Khomanta still has the option to buy from them without giving up all their stock.

However, there’s another reason Clint and Haydee are reluctant to branch out into new origins. In the developing world of specialty coffee, origin is taking on less and less significance, giving way to other factors such as terroir and processing methods.

To illustrate this, Clint recounts the reaction of a friend who works as a judge and roaster at the Cup of Excellence awards in Costa Rica. A while back, he came to visit the couple and tried some of their Peruvian coffee. He told them that, had he not known, he would have assumed it was Costa Rican.

This convinced Clint that their coffees didn’t need to come from multiple origins to maintain consumer interest.

“It doesn’t matter where it’s from,” he says. “The varietal and processing and care that’s gone into it matter more than the origin. Or at least less so than it used to.”

Sustainability. Ethical-sourcing. Transparency. Traceability. The coffee industry is flooded with buzzwords and labels that attempt to paint a picture of roasters “doing good” – for the farmers, for the environment, for the local community.

Unfortunately, many of the terms used lack any real substance, with initiatives often more beneficial for the roasters than they are for the producers. This is a reality that Clint and Haydee are well aware of and, as such, have been keen to avoid from the start.

“We found some really interesting companies that said they would give 50% of profits, which we thought was a great amount,” Clint explains. “But then we realised that it’s 50% of the Fairtrade bonus, which is nothing. It ends up being a few cents per sack.

“So we said, ‘Let’s make this as easy as possible’, and set up a profit sharing scheme. It started out giving 10% of profits, but we realised it was pretty small, so we moved up to 30%. This is what we thought would be a fair price that they could use to reinvest into their farms and grow with.”

Additionally, Khomanta offers zero-interest loans that are paid back through the profit sharing scheme. This means that farmers can purchase products, such as fertiliser and tools, to make their farming more efficient without worrying about paying back high interest rates.

They also make an effort to keep their farmers in the loop about what happens to their coffee once it leaves the farm, as well as providing them with books for keeping notes about different aspects of their day-to-day operations. This helps to promote a level of transparency that is often only spoken about from the consumer side.

“For the most part, farmers produce the coffee and then it disappears, they don’t know what happens – all they get is a paycheck,” Clint says. “So it’s eye-opening for them when they’re told what it’s like and it helps them improve the quality of their coffee going forward.”

While Khomanta runs various other initiatives to help producers in Peru, they keep them largely under wraps, mindful of how over-promoting them can quickly make selfless acts appear self-serving. As Clint is keen to point out, “these days, it’s hard to come off as genuine.”

This is an unmistakable sign of a specialty roastery that wants to make genuine change at origin. Naturally, any initiative that has a positive impact for disadvantaged farmers will have its marketing benefits. But unlike others, Khomanta was established with a clear intention: to help producers in any way they could.

As far as I can tell, they’re doing a splendid job.

Did you enjoy this edition of Roaster of the Week? Next time, we’ll be speaking to Roastworks, the UK roasters that want to bring specialty coffee to the masses.

Sign up!
Khomanta: The Kansas City roasters on a quest to make genuine change at origin