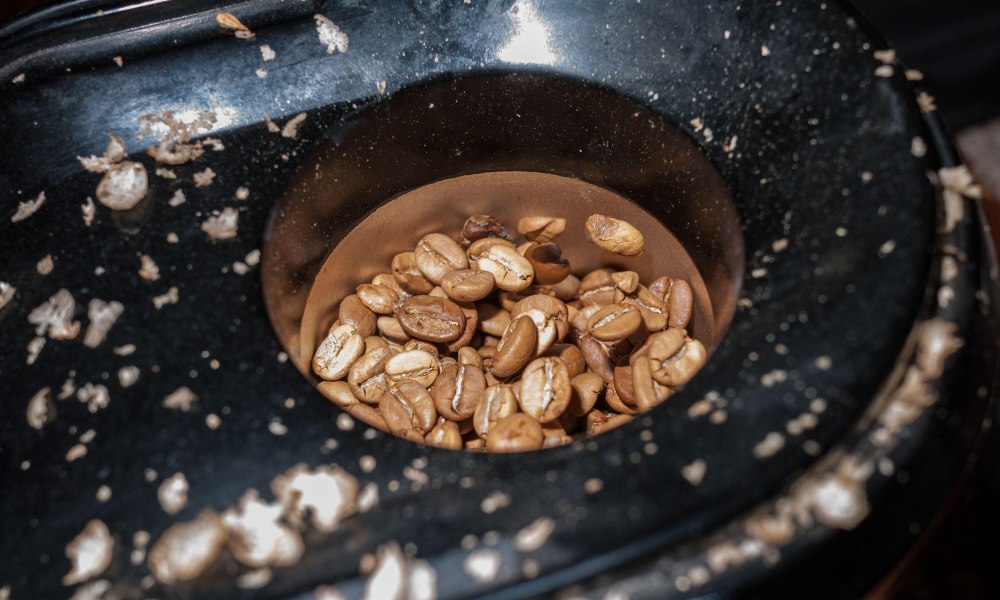 Over the years, a common language has developed around coffee roasting. Terms such as first crack, airflow, and rate of rise all act as shortcuts to effectively share knowledge among the roaster community.

Cinnamon roast is a widely used term to refer to coffee dropped from the roaster very early in first crack. Not to be confused with cinnamon-flavoured coffee, it is so called due to the light brown colour of the beans when they’re discharged.

Although the low weight loss of cinnamon roasts makes them popular among roasters who want to cut costs, the coffee tends to be grassy and highly acidic when brewed, which can put off potential customers.

To find out more about cinnamon roasts, I spoke with 2019 World Cup Taster Champion and founder of Sumo Coffee Roasters, Daniel Horbat.

Why do roast profiles matter?

Naturally, the role of a roaster is to unlock the full potential of each and every coffee they source, taking it from its a raw green bean form to a flavourful good ready to be ground and brewed.

A large part of this comes down to the roast profile. A roast profile (or roast level) is a set of parameters that defines how a coffee should be, or has been, roasted. It can be measured in a number of ways, including turning point, rate of rise, and end roast weight loss.

However, using these measurements alone is not usually enough to give an accurate picture of a roast profile. It is also important to use visual and sensory cues, including the colour of the beans and its characteristics in the cup.

What could be a “full city” to one roaster, may be labelled as a “city” to another. In other words, the same coffee roasted with two slightly different profiles could achieve the same colour while highlighting different characteristics in the cup.

These discrepancies stem from a number of factors, such as the coffee variety, the density of the beans, and the charge temperature of the roast. As such, roast profile must be judged in conjunction with several different measurements.

The end goal for any roast profile is to highlight the best qualities of any particular coffee. That means what could work as a medium roast for one batch, won’t necessarily bring out the best for another batch of different beans.

If the coffee is recognised for its bright acidity and floral notes, for example, the beans may need slightly less time to develop. If, on the other hand, they have a unique, sweet, nutty flavour that works well with milk, then they may require slightly longer in the roaster.

What is a cinnamon roast & why do roasters choose it?

Although it may occasionally come under a different name, a cinnamon roast is generally considered the lightest possible roast profile for a coffee.

Coffees roasted to this degree are often very acidic in the cup, with little balance. The body and mouthfeel are often very light and delicate, while flavour notes are typically described as “grassy” and “peanutty”, with low sweetness and a floral aroma.

Daniel Horbat is the founder of Sumo Coffee Roasters in Dublin. He founded the roastery after being crowned World Cup Tasters Champion in 2019. He tells me that as well as origin, cinnamon roasts tend to be more profitable for roasters due to the high moisture retention in the beans.

“The biggest advantage of cinnamon roast is the fact that coffee retains the terroir characteristics,” he says. “Coffee will be brighter and retain much more complex flavours of the coffee fruit.

“Another advantage is the reduced coffee loss compared with a darker roast, since it loses less moisture, resulting in a higher quantity of roasted beans.”

Indeed, coffee can lose between 12% and 24% of its weight during a roast depending on various factors, such as initial moisture content and roast temperature. Generally the lighter the colour reading, the lower the weight loss. This means roasters can pack fewer beans into the same sized bag, generating a greater profit per batch.

Daniel also says that cinnamon roasts are often popular among consumers looking for coffees with a high content of antioxidants. According to a study published in the Journal of Medicinal Food, lighter roasts contain higher concentrations of chlorogenic acid, which helps protect against human cell damage and inflammation.

“The bold, fruity, and floral flavours of a light roast coffee tend to be very exciting, and this is why we, at the roastery, mostly roast light and light-medium coffees,” he says. “In addition to this, light roasts also tend to have more antioxidants present in the beans.”

A few things to consider

Cinnamon roasts may suit certain coffees – but it’s not for everyone.

According to coffee author and roast consultant Rob Hoos, a coffee’s roast profile is closely tied to the sucrose content caramelised during a roast. Generally speaking, the lighter the roast and the lower the temperature, the less sucrose will be caramelised.

If the development is too light, which is often the case with cinnamon roasts, pyrolysis of some compounds may not properly occur, giving the coffee vegetal tones in the cup. This is because the internal temperature of the coffee beans will not have reached 400°F (204°).

On the other hand, too much caramelisation and, eventually, too much pyrolysis, leads to an excessive amount of bitterness, which flattens the complexity of the coffee.

Daniel explains that when roasting light, it’s important to develop the coffee in a way that highlights the inherent flavours, rather than bringing out unwanted characteristics such as sourness.

To do this for a cinnamon roast, it’s best to start at a longer temperature and very gradually work up to 400°F. This longer roast time provides a greater opportunity for the acids and carbon dioxide (CO2) in the beans to release, providing a better quality roast.

For roasters, finding the perfect roast profile for each coffee is a fine art that can take a while to finesse. Where one may be suited to a cinnamon roast, another might benefit from a longer development time.

At MTPak Coffee, we can help you design the perfect coffee packaging, whether roasting light, medium, or dark. Our expert design team can assist you with everything from pouch types and colour schemes, to materials and additional components.

For information about our compostable coffee bags, contact our team.

Sign up!
Coffee roasting basics: What is a cinnamon roast?