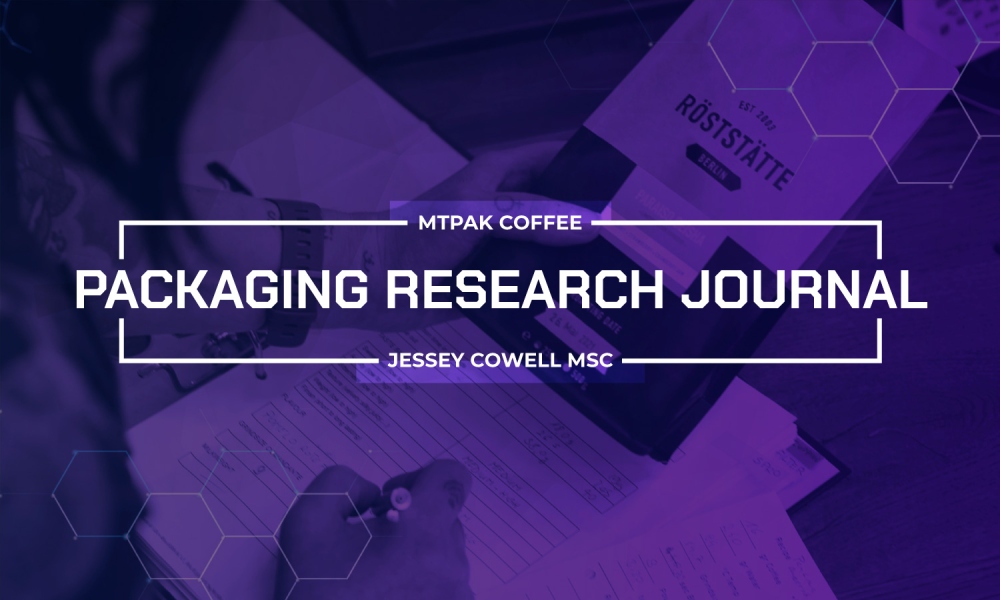 In 2018, as part of an MSc Food Science diploma at the University of Guelph, Ontario, Jessey Cowell carried out research into the behaviour of degassing valves on roasted coffee. His studies culminated in a paper titled, One-way Degassing Valve Behavior & Function in The Acceptability of Stored Coffee. We spoke to Jessey about his findings and why he thinks degassing valves play such a fundamental role in the preservation of coffee’s freshness.

Preserving the original, unimpaired qualities of roasted coffee – otherwise known as “freshness” – is a chief concern among coffee roasters. If their coffee arrives to the consumer stale, rancid, or lacking in flavour, it can have a considerable impact not only on the reputation of the business, but its long-term success.

However, once coffee is roasted, the loss of freshness begins immediately. Carbon dioxide (CO2) and other volatile gases absorbed by the beans during the roasting process are released the moment the coffee leaves the roaster. This leaves the porous structure of the beans open to oxidation and staling should they be exposed to the external environment.

Integral to the preservation of freshness is the degassing valve, a one-way vent that keeps coffee packaging airtight by relieving the pressure of escaped gases without allowing oxygen to enter.

“Given the nature of roasted coffee, and all the wonderful aroma and CO2 gases that are released during the roasting process, there is obviously a lot of pressure that comes along with the additional gases built up,” explains Jessey Cowell, a validation specialist who, in 2018, conducted research into the behaviour of degassing valves on roasted coffee.

“It’s been very problematic for the industry to package the product immediately after roasting. It was never really feasible to do so immediately. There would need to be a period of time where the coffee would be allowed to off-gas and relieve all those gases prior to packaging, so that they could ensure the package wouldn’t rupture under the additional pressure.

“So with the advent of the one-way degassing valve, they’ve been able to eliminate or at least greatly reduce that degassing time, which would allow the roasters to pack the coffee pretty much immediately after roasting once it’s been sufficiently cooled.

“It would really contribute to a more fresh coffee product, helping to maintain all those wonderful coffee volatiles and reduce the time for oxidation to take place. The gas can blanket the coffee within the package and relieve it as and when required. It’s a handy little system.”

The impact of degassing valves on the shelf life of coffee

Since their introduction to the market in the 1960s, degassing valves have revolutionised the way coffee is packaged. Versatile, lightweight, and affordable, they can be fitted to a range of substrates, from kraft paper to PLA.

While there are a number of different designs, Jessey tells me that the majority operate based on a sealant liquid or fluid.

“There’s a little rubber diaphragm enclosed within the injected moulded valve,” he says. “The inner layer within the coffee side is a sealant layer of liquid that maintains the surface tension against the body of the valve. That’s really the gate for the opening and closing of the valve.

“Once the surface tension is reached by the pressure differential, the liquid will come away and the diaphragm will move, allowing for that passage of gas to get out into the environment.”

The first part of Jessey’s research focused on the open and close behaviour of degassing valves loaded with sealant fluids of varying viscosities. Using ground, dark roasted coffee, he measured the frequency of valve openings, which he found decreased with increasing sealant fluid viscosity.

The second part explored the role of degassing valves in the development of sensory differences in roasted coffee. Specifically, he looked at how changes in the behaviour of degassing valves affected the shelf life of the coffee, recruiting participants to taste the coffee bi-weekly over the course of 12 weeks.

Jessey tells me that from as early as six weeks, the participants noticed changes to the sensory qualities of the coffee.

“We used a French press to brew the coffee and, overall, people were able to detect differences in the characteristics of the coffees that were stored,” he says.

This largely comes down to the ingress of oxygen, which replaces CO2 that has escaped and causes the compounds in the coffee to change. Research shows that for every 1% increase in a coffee’s oxygen levels, there is a 10% increase in the rate of degradation.

Jessey’s research found that while the opening and closing behaviour of the degassing valves had a negligible effect on the ingress of oxygen during testing, the pressure inside the packaging caused by different degassing rates did have a measurable effect, particularly for the degassing valves with less sealant fluid.

“You notice the oxidation in the fine sensory characteristics of a freshly roasted coffee,” Jessey explains. “There’s a rapid decline in the aroma and characteristics of each brew pretty quickly after its exposure to oxygen; quite a bit more than if it was exposed to moisture or UV light.

“It’s a primary concern for the longevity of the coffee. Ensuring the headspace has as little oxygen as possible is going to give you a good shelf life to maintain the integrity of the coffee. It’s often done in a modified atmosphere and relies on the off-gassing to help blanket the quality of the coffee.”

Can roasted coffee be packaged without a degassing valve?

Degassing valves have undoubtedly changed the face of coffee packaging the world over – but are they a necessity for roasters? Jessey explains that the decision should be based on several factors, such as whether it is ground before packaging.

“It depends on the quantity of the coffee, and whether it was ground or whole bean,” Jessey tells me. “I’d say with whole bean not a chance. There’s so much gas stored within the pores of the coffee that it takes so long to relieve all the gas.

“If you’re grinding it to an espresso grind, I would imagine it would degas very rapidly and you could get away with packaging it quite soon after it’s been roasted.

“If you had a 400g bag of beans you would struggle to package that immediately unless there was some way for the gas to escape. It would be best to put a degassing valve on the packaging if it’s going to be consumed over a long period of time to maintain that longevity of shelf life.”

This, Jessey explains, is the primary role of a degassing valve: to preserve the sensory characteristics of the coffee contained in the CO2 without compromising the packaging.

“It’s all about walking the line of what the packaging can endure, while maintaining as much of the CO2 and volatiles as you can in the headspace. That’s really what it boils down to.”

Although more exhaustive studies into the impact of one-way degassing valves on the freshness of roasted coffee are required, Jessey’s research clearly identifies the influence that different degassing valve designs can have.

Importantly, he demonstrates that roasters must take an interest in all aspects of their packaging if they are to deliver consistently fresh coffee to consumers.

At MTPak Coffee, we offer a range of sustainable coffee packaging that can be fitted with recyclable, BPA-free degassing vales that protect both the freshness of the coffee and the integrity of the packaging.

Sign up!
The role of degassing valves in the storage of roasted coffee