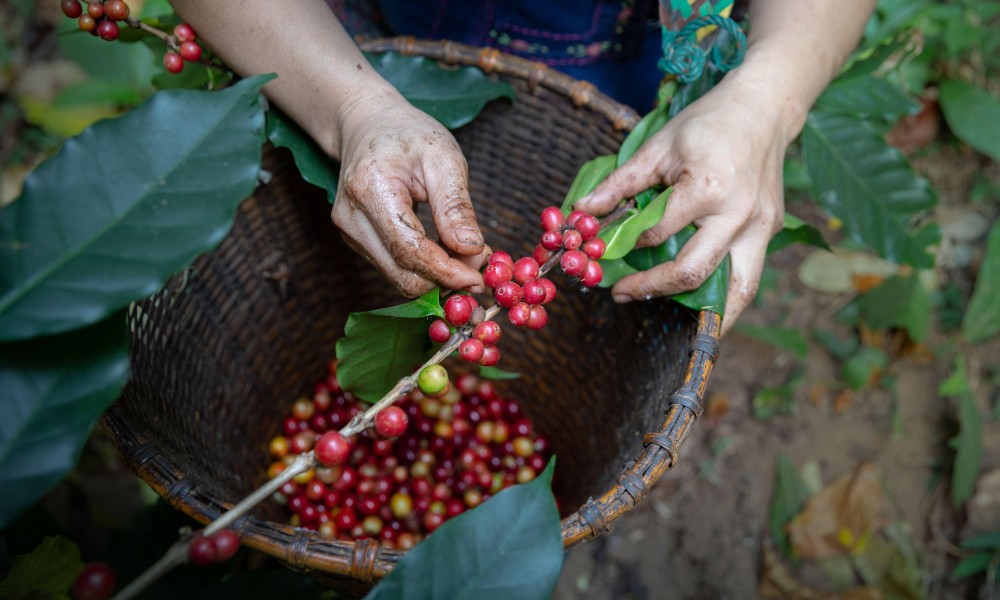 Few coffee varieties have such a rich and fascinating history as Typica.

Originating in the coffee forests of southwestern Ethiopia before spreading to Yemen, India, and beyond, it has come to spawn one of the most culturally and genetically important groups of arabica coffee in the world.

Despite a relatively high susceptibility to the much-dreaded coffee leaf rust, Typica remains an immensely popular variety among coffee growers thanks to its clean, complex, and generally high-quality cup profile.

However, it’s the variety’s subtypes, including Criollo, Arabigo, Kona, and the famous Jamaica Blue Mountain, that make up the bulk of Typica’s descendants today.

To find out more about its history and characteristics, I spoke with head roaster Mihaela Iordache and founder of Sumo Coffee, Daniel Horbat.

A brief history of Typica coffee

Between the 15th and 16th centuries, Typica was among the first batch of coffee seeds to be taken from southwestern Ethiopia for cultivation in Yemen.

By the late 1600s, the seeds had arrived in India, before being sent to Batavia (present-day Jakarta) from the Malabar coast.

In 1706, Dutch traders took a single Typica plant from Indonesia to a botanical garden in Amsterdam. It’s believed that this plant then spawned all Typica cultivars in the Americas. This is because upon the signing of the Utrecht Peace Treaty in 1714, the mayor of Amsterdam shared a coffee plant from the botanical garden with France.

Throughout the 18th century, the French then spread the plants along colonial trade routes, including in French Guiana and Martinique. From here, they found their way to other parts of Central and South America, as well as Jamaica, Cuba, and the Dominican Republic.

By the late 1700s, Typica could be found all over the Americas, where it became the dominant variety on farms. It wasn’t until the mid-20th century that its low yield and susceptibility to diseases encouraged farmers to replace it with more robust varieties.

What are its characteristics?

Recognised by its tall plants and bronze leaf tips, Typica is the variety from which many of the arabica crops cultivated today originate.

Its subtypes have a range of characteristics that largely depend on where and how they’re grown. For example, Maragogipe is a natural mutation of Typica grown predominantly in Guatemala, which is known for its large bean size.

Blue Mountain, on the other hand, grows in the Blue Mountain region of Jamaica and tends to be more susceptible to diseases than other Typica subtypes.

Mihaela is head roaster at Cafes Belleville in Paris. She tells me that while most Typicas have a desirable profile, the low yield offered by their plants means it has been somewhat eclipsed by other varieties in recent years.

“From my experience, Typica is a clean variety of very high quality,” she says. “But it can be difficult to produce. Its yield is around 30% lower than Bourbon plants, which makes it a hard variety to choose unless you’re sure you can sell it.

“I think the reason most of the coffees I’ve been roasting over the past six years have been Bourbon and not Typica is because of the production side. It’s easier to produce Bourbon, so it’s a lot more common.”

Because of its low yield, a number of Typica hybrids have steadily entered the market and become popular among producers.

For example, Mundo Novo is a Typica-Bourbon hybrid favoured by Brazilian coffee farmers thanks to its high yield and good cup profile.

Clean, complex, and typically sweet with a broad range of flavour notes, Typica in all its various forms has remained a popular choice for roasters.

Typica grown in different origins will have its own distinct set of characteristics, which makes it an intriguing variety for both roasters and consumers.

Blue Mountain, for example, is known for being mild, mellow, and smooth, with notes of nuts and chocolate, and a creamy sweetness that pairs well with milk.

But Indonesian Typica, Mihaela says, is considerably different. “I have been roasting a washed Indonesian coffee which is 100% Typica for many years,” she explains. “This coffee is very clean and has a nutty, floral, fruity aspect to it.

“Yet because it is closely tied to the soil and terroir of its origin, it also has some vegetal and spicy tones with a clean acidity and fruitiness.

“Overall, I think not enough praise is given to this variety and, if the coffee community started to appreciate it, we would have more of them. The elegance of its notes and complex aromatic profile is something worth celebrating.”

When it comes to roasting Typica, each lot has to be treated according to a number of different factors, including density, bean size, and moisture content.

It’s ultimately the roaster’s responsibility to assess the beans and make decisions based on cupping.

For example, Mihaela says she’s noticed that varieties that are genetically related to Typica, such as Pache and SL34, generally have large beans.

This is an important factor to consider as screen size changes roasting parameters like charge temperature, heat, and airflow.

Daniel tells me that while it is not always the case, some bigger beans might absorb heat faster which can give them a smoky taste. Furthermore, when beans expand in size, you might end up with less airflow in the drum.

“Making sure you have enough airflow to support the roast has been one of my biggest observations with the Typica coffees that I roasted,” Mihaela adds.

Ultimately, Typica is a variety that offers excellent cup quality potential. With its outstanding clarity and acidity, it is worth exploring and deserves greater recognition.

As a roaster, it is always important to unlock the full potential of every coffee that you roast, but that is not all. Highlighting the story of your coffee and promoting its uniqueness through packaging can foster greater appreciation among consumers for the work that goes into producing the coffee.

At MTPak Coffee, we have a dedicated team of designers who can work closely with you to design the best packaging to showcase your coffee.

Our high quality pouches will keep your beans protected and fresh for longer. You can choose from a range of eco-friendly packaging options through our Go Green packaging line, which includes kraft paper bags, BPA-free degassing valve, low VOC inks, and more.

For information on our compostable coffee bags, contact our team.

Sign up!
Coffee varieties: A complete guide to Typica