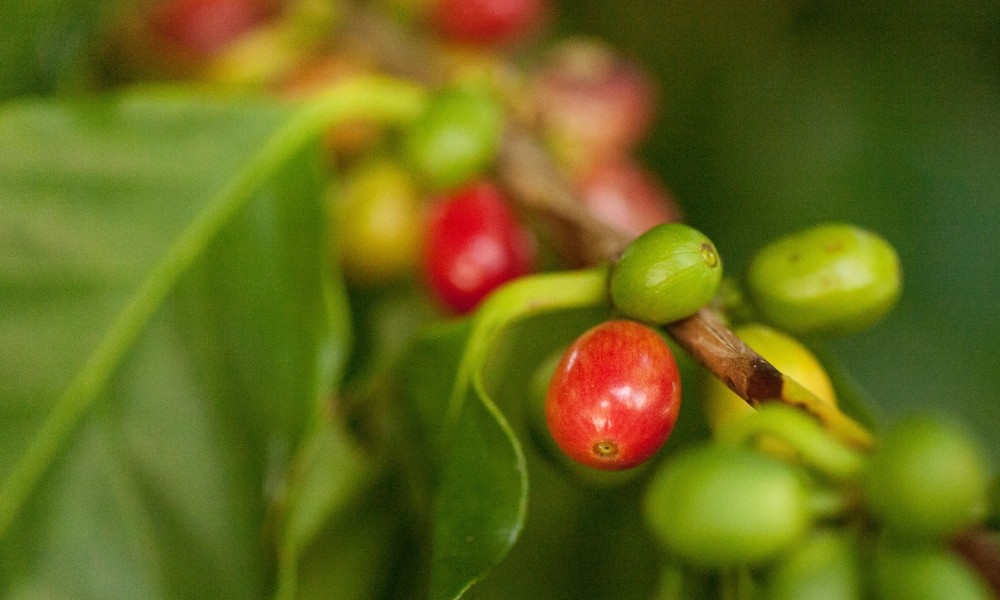 Of all Bourbon’s natural mutations, few varieties are quite as well known as Caturra.

Widely grown in Central and South America, it was first discovered on an estate in Minas Gerais, Brazil around a century ago.

From there, it spread to countries such as Guatemala, Honduras, Costa Rica, and Colombia, where, at one time, it accounted for nearly half of all coffee production.

Over the years, Caturra has gained a reputation for having high-quality cup potential. It’s generally recognised for being crisp, complex, and sweet with bright acidity – although this can vary depending on where it was grown and how it was processed.

These characteristics has made Caturra a popular choice among roasters, while the short stature of its plants – which allow for denser planting and easier picking – means it is also favoured by producers.

However, high susceptibility to coffee leaf rust has led many to cross-breed with more resistant varieties, such as Timor. This has resulted in falling production of pure Caturra in recent years.

To find out more about this coffee variety and its benefits for roasters, I spoke with Bella Vista Coffee’s quality control manager, Dulce Barrera.

Caturra is a natural hybrid of Bourbon, one of the world’s most culturally and genetically important varieties of arabica coffee.

But although Bourbon originated in Ethiopia, the first Caturra seeds were found more than 10,000km away on the borders of Minas Gerais and Espírito Santo in Brazil.

Studies revealed that the seeds were a result of a natural mutation of Red Bourbon trees found in Rio de Janeiro.

As such, Caturra shares a number of similarities with Bourbon. For example, it tends to grow best at between 1,200 and 2,000 metres above sea level (masl) in areas with around 3,000mm of annual precipitation.

However, Dulce explains that the slow rate at which Caturra ripens can affect the plants’ yield when grown at particularly high altitudes.

“The Caturra variety of coffee is more adaptable between 600masl and 1,300masl,” she says. “But because of a tendency to ripen late, there is a risk when it is grown at high altitudes that the last part of the harvest won’t be ready in time.

“Having said that, Caturra, like Bourbon, is resistant to droughts, winds, and exposure to sunlight. It also adapts well to hot temperatures.”

Caturra plants are often described as “dwarf” or “compact” due to their small stature. This makes them popular among producers, who can fit a greater number of plants into each square metre of land. Their small size also makes it easier for workers to handpick ripe cherries.

The only real drawback is its susceptibility to diseases, particularly nematodes and coffee leaf rust. As a result, many farmers have started cross-breeding Caturra with other varieties to improve resistance. This has led to hybrids such as Catuai, Catimor, Maracaturra, and Pache Colis.

It’s also important to make the distinction between variations of Caturra, such as Red, Yellow, and the recently discovered Lerdo. While still categorised as Caturra, they have slightly different characteristics.

For example, Yellow Caturra, which is caused by a recessive gene, tends to ripen faster than Red Caturra.

What is the typical cup profile of Caturra?

Caturra is one of the most sought-after coffee varieties on the market. This is largely thanks to a balanced set of characteristics, many of which overlap with Bourbon.

Even Dulce, who has won several cup taster competitions, says she tends to mix them up.

“Their profiles are so close that I often confuse them when tasting,” she says. “Caturra’s cup profile is usually balanced, sweet, and citrusy with aromas of maple and honey notes.

“These are things that most roasters look for and, in the Antigua area, they are among the most appealing for buyers.

“A good percentage of Guatemalan producers have Caturra in their plots. They continue to sow them because of their high yield and excellent cup profile.”

“I remember the flavours of a cup of Caturra coffee from a farm located in San Martin Jilotepeque in Guatemala,” Dulce says.

“It was sweet, citrusy, clean, and balanced. Later the owner of the farm told me that he had entered that coffee in the auction – and that it had done very well.”

When it comes to roasting, Caturra beans offer versatility thanks to their balanced sweetness and acidity.

For example, those that prefer light roasting can focus more on defining the acidity in the bean. In contrast, medium to dark roasts tones down the acidity and raises the sweetness in the cup.

Along with the flavour profile, the consistent size of the beans lowers the possibility of unwanted roast defects.

Dulce says: “Most of the beans are medium-sized. Their screen size is more or less 16, so it is common to roast Caturra here in Guatemala. Caturra beans also tend to be easier to roast than Pacamara or smaller beans like Mocca. It’s only when moisture levels are high or when they are processed differently that it becomes a challenge.”

Varying sizes of beans can sometimes create inconsistency in roasting. Therefore, understanding how a bean will behave during the roasting process can give roasters peace of mind and help them plan accordingly.

With such close ties to Bourbon, it is not surprising how popular Caturra has become in the world of coffee.

The variety’s complex yet balanced flavour profile, gives it widespread appeal on the market.

With its small compact plant stature and good yields in harvest, farmers can get more out of their Caturra crops. Meanwhile, its consistent bean size makes it easy for roasters to achieve quality results, batch after batch.

At MTPak Coffee, we understand the need for consistency and quality to help drive your brand image.

We offer sustainable packaging in a range of sizes and shapes, including flat bottom, side gusset, and stand-up pouches. Our high-barrier materials help to preserve the coffee’s freshness, while ensuring it reaches the customer in the best condition possible.

Sign up!
Coffee varieties: A roaster’s guide to Caturra