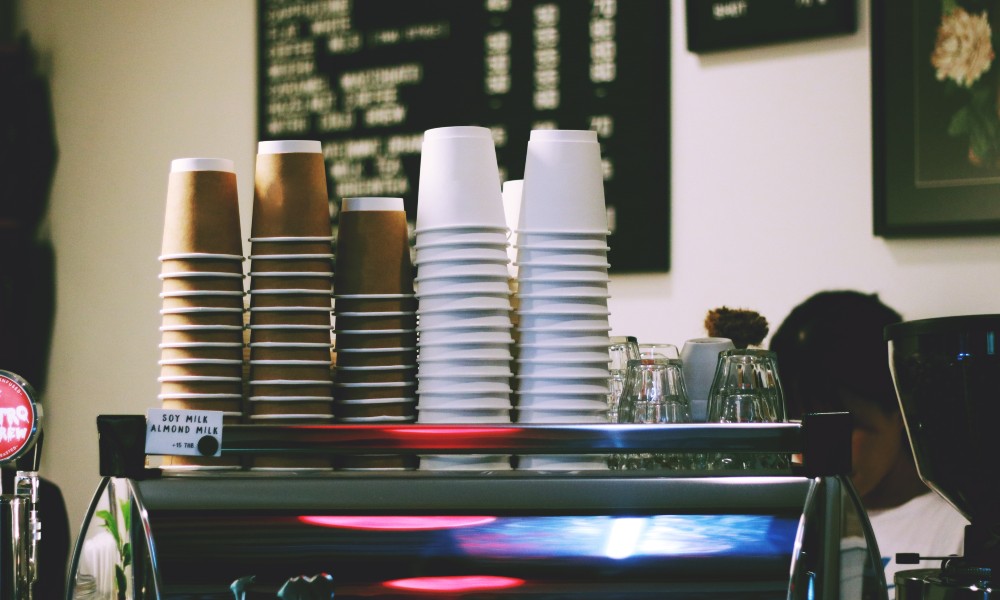 In recent years, the popularity of takeaway coffee has soared. Fuelled by extended lockdowns and concerns over crowded spaces, it’s thought that nearly 80%

Convenient, affordable, and hygienic, they allow businesses to serve a greater number of customers without expanding their premises, while also catering to the on-the-go lifestyles of consumers.

However, the environmental impact of takeaway cups has come under increasing scrutiny. According to estimates, approximately 2.5 billion takeaway cups are disposed of every year in the UK alone, the majority of which end up going to landfill.

While alternatives such as reusable “keep cups” have been put forward as a solution, relying on customers to bring their own cups is not only unreliable, but also considered largely impractical due to heightened concerns over hygiene.

Instead, compostable takeaway cups have risen to become one of the most sustainable, long term options for coffee businesses.

The problem with plastic

If you go to your local coffee shop, the chances are you’ll be able to order a coffee to-go served in a takeaway cup.

For businesses it is in many ways a more profitable model, as they don’t have to provide seating and they can serve a higher turnover of customers. However, the issues arise when it comes to choosing the materials from which the takeaway cups are made.

For a long time, styrofoam was virtually unrivalled as the material of choice for takeaway coffee cups.

Then, in the late 1980s, Seattle-based coffee chain Starbucks introduced their paper cups along with Solo Traveller lids. Coffee companies around the world quickly followed Starbucks, and most have offered their own version of the paper takeaway cup ever since.

Not only are takeaway cups useful for transporting coffee and increasing footfall without providing extra seats, they act as an effective marketing tool for coffee shops.

Put simply, anyone carrying around your takeaway cup – whether in a park, a leisure centre, or a shopping mall – is essentially a walking advertisement for your brand.

But concerns over the environmental impact of takeaway cups have grown in recent years, particularly around the use of plastic cups.

Critically low recycling rates mean that cups made from materials such as polyethylene (PE), which are frequently posited as “recyclable”, end up going to landfill sites or the ocean instead. For example, in the UK, it’s believed that just one out of every four takeaway cups actually ends up being recycled.

A lack of facilities equipped to deal with plastic cups is the main reason behind this: the specialist equipment, transport, and infrastructure required to handle these cups are unavailable even in the most developed countries.

Are reusable cups the answer?

According to a recent study, nearly two-thirds of consumers worry about the environmental impact of disposable cups.

This means that businesses which fail to provide sustainable alternative could end up falling behind more eco-friendly brands and losing their competitive edge.

In an attempt to reduce the amount of takeaway cups in circulation, many coffee shops have started encouraging customers to bring their own reusable cups, such as by offering discounts.

For example, UK coffee chain Pret A Manger takes 50p off all coffee orders if customers provide their own cup. As an added incentive, some have even started charging an extra fee for those who ask for a takeaway cup.

Yet while this has been relatively successful, the outbreak of Covid-19 prompted many coffee shops to withdraw their endorsement for reusable cups amid concerns over hygiene.

What’s more, a poll of UK consumers found that just 36% had invested in a reusable cup, while just two out of five said they remembered to bring it with them when they bought coffee on the go.

These figures, combined with the fact that many reusable cups must be used up to 100 times before their environmental benefits are realised, have made many look for other ways of reducing the impact of their takeaway coffee habits.

Compostable takeaway cups have risen to become one of the most popular choices for coffee shops and roasters looking for a sustainable solution.

Affordable, lightweight, and robust, these cups do away with plastic PE lining in place of more eco-friendly alternatives, such as polylactic acid (PLA).

PLA is a plant-based bioplastic made from renewable resources, including corn starch and sugar cane. It offers a strong, waterproof coating that can support both hot and cold liquids without affecting the flavour of the drink.

Unlike plastic PE, PLA is compostable and will break down in controlled environments without releasing harmful residues. Under normal conditions, this process can take up to 180 days, but in commercial facilities it is often just half that time.

But one of the main advantages of PLA lining compared to conventional petroleum-based plastics involves its production.

According to a 2017 research paper on greenhouse gas mitigation for US plastics production, switching from petroleum-based plastics to corn-based bioplastics like PLA could cut US greenhouse gas emissions by a quarter.

By switching to compostable takeaway cups, coffee shops can continue serving coffees to-go while limiting their impact on the environment. Not only will this put them ahead of competitors, it will also improve the sustainability of the coffee supply chain.

This is especially true when water-based inks are used to customise the cups in place of solvent-based inks. Water-based inks have low volatile organic compounds (VOCs), which can be harmful to the environment and the wellbeing of people.

As they are made from plants, they’re also compostable and don’t have to go through the complicated process of being removed before recycling.

As fears over social mixing linger in the wake of Covid-19, takeaway coffee orders are expected to remain a popular choice among consumers. As such, it’s become crucial for cafés and roasters to offer their coffee to go, both to retain a competitive edge and to keep open an important revenue stream.

However, with concerns growing over the environmental impact of disposable cups, choosing a sustainable option must be a priority.

At MTPak Coffee, we offer 100% compostable takeaway cups in three different sizes. Made from PLA and kraft paper, they can be customised with your branding to help showcase the quality of your coffee and your commitment to the environment.

For information on our compostable coffee cups, contact our team.

Sign up!
Compostable cups: Why coffee businesses should make the switch