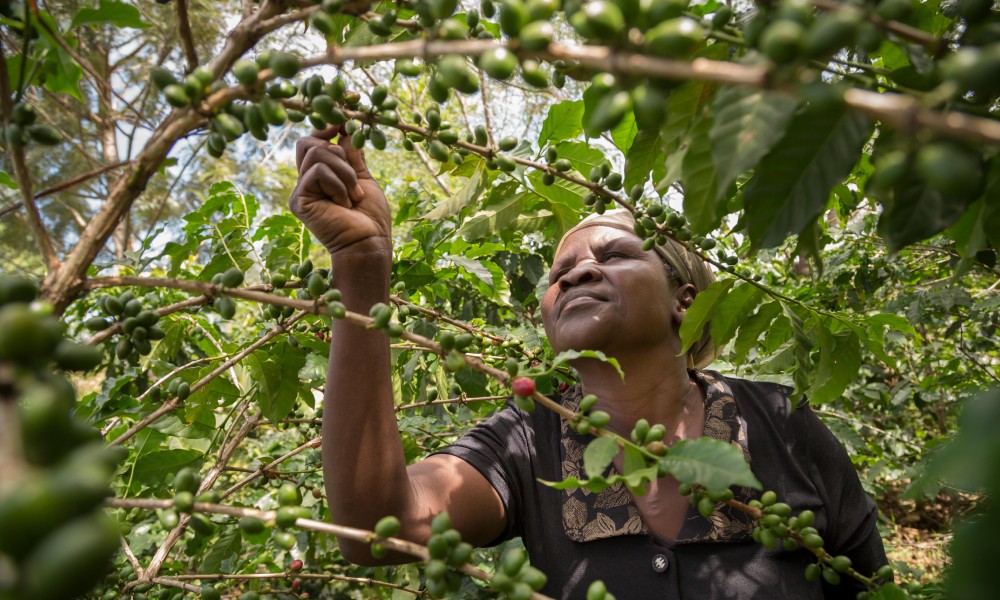 For thousands of years, wild coffee grew in the shade of a canopy of taller trees, which helped create an optimal growing environment for most varieties.

In modern farming practices, this is often referred to as an “agroforest” setup. This is where coffee trees are planted alongside native trees to replicate the indigenous rainforest environment. In the industry, this is referred to as shade-grown coffee.

However, during the 1970s, coffee producers were under pressure to increase production. This led to a dramatic change in farming practices, as many producers switched to growing coffee varieties that flourished in the sun.

As a result, most producers cut down their canopy of shade trees to plant rows of coffee in direct sunlight. While these varieties generate higher yields and provide farmers with more profit, they require the use of fertilisers and pesticides.

Globally, over 40% of the world’s coffee is sun-grown, with only 24% being shade-grown. As sustainability is a priority within the coffee sector, many have questioned why all coffee is not shade-grown – as it is widely considered the more environmentally friendly and economical method.

Read on to find out more about shade-grown coffee and its chief benefits for the coffee industry.

The difference between shade-grown and sun-grown coffee

Shade-grown coffee is considered the traditional method of growing coffee, as continuous direct sunlight can damage many varieties.

Tree canopies act as a natural filter by lowering the intensity of the sunlight. Additionally, it helps keep the soil at optimum moisture and nitrogen levels, as the leaves fall below and decompose into mulch.

Furthermore, canopies create a natural habitat for a variety of birds, which eat many of the insects that may damage the coffee plants. This biodiversity helps create a sustainable method of farming as little to no chemicals are used.

The introduction of sun-resilient coffee varieties in the 1970s saw most producers clear their land in order to plant rows of coffee. This increased the use of chemical fertilisers and pesticides.

Those who continued to use shade-grown methods did so because they could not afford the chemicals needed to farm modern coffee varieties.

These new varieties produced more beans that were smaller and easier to harvest. However, their cultivation resulted in mass soil erosion, water run-off, and loss of land.

Over time, large areas of natural forest were removed to plant additional coffee crops. Notably, in all of Central America, sun cultivation of coffee has led to a 2.5 million-acre loss of land.

What are the benefits of shade-grown coffee?

Essentially, industrial progression was the focus when traditional farming methods were replaced.

However, concerns about sustainability in the coffee industry have seen a growing number of producers return to more natural ways of farming coffee.

Cultivating shade-grown coffee offers producers a number of benefits, including the potential for a higher-quality bean.

Generally, shade-grown coffee benefits from the cooler temperatures it creates. Much the same way as with coffees grown at high altitudes, the cherries develop and ripen at a slower rate.

This extended ripening period increases the amount of natural sugars in the coffee beans, helping to develop more sweetness and complexity in the final cup. Alternatively, sun-grown coffees are often considered to be bitter and more astringent.

In regard to sustainable farming practices, shade-grown coffee farms can help repair the environment and protect numerous species of birds. An estimated 75% of the world’s coffee production actively destroys forest habitats and endangers millions of birds.

That said, a 2019 study revealed migratory birds tend to favour coffee farms that have native trees, and will return to them each year.

While there isn’t a certification to show coffee has been shade-grown, “Bird Friendly” certifications are gaining momentum in the coffee industry. Bird-friendly coffee is produced in a way that limits the impact on surrounding bird habitats and populations.

Why isn’t all coffee shade-grown?

Considering the positive impact shade-grown coffee can have on the environment and quality of crops, it can be difficult to understand why it is not used universally.

It is important to note that the benefits of shade-grown coffee are not always equal for every coffee producer.

For instance, an aspect that is often forgotten is how the angle of the sun can play a role. The further a farm is located from the Equator, the less need there is for shade to protect the coffee plants from the sun.

An article by Mercanta Coffee Hunters explains the strength of the sun’s rays in Brazil – where the sun is at an angle – is far less than the direct overhead rays in Central America.

Therefore, shade cover may benefit producers in Central America, where it may lead to a fall in crop yields for those in Brazil.

Another point of consideration is how the possibility of too much shade made result in fungal infections. This is particularly relevant in growing regions with high humidity, as fungal infections that are not treated effectively may destroy coffee crops.

The final deciding factor in whether a coffee producer changes practices would be the economic position of the farm. With such fine margins between profit and loss, the added investment into fundamental farming practices may not be affordable – even when environmental sustainability is a significant concern.

Educating producers on the benefits of sustainable farming practices can help them implement better growing methods, which can lead to greater yields of higher quality coffees. As a result, producers can sell their coffees at higher prices, allowing them to re-invest in their farms.

At MTPak Coffee, we have a wealth of information on our Education Centre that can guide producers, roasters, and coffee shop owners towards more sustainable practices and ethical sourcing.

Furthermore, we are able to provide 100% recyclable coffee bags in a variety of shapes and sizes. Our range of sustainable packaging is made from renewable resources such as kraft and rice paper.

Our team is also able to custom-print coffee packaging with a 40-hour turnaround and 24-hour shipping time, allowing us to offer low minimum order quantities (MOQ) on both recyclable and traditional options.

For more information on sustainable coffee bags, contact our team.